Elden Ring Astel Cheese: How to Easily Beat Astel, Naturalborn of the Void

Take back the power of gravity and the stars from this omen. 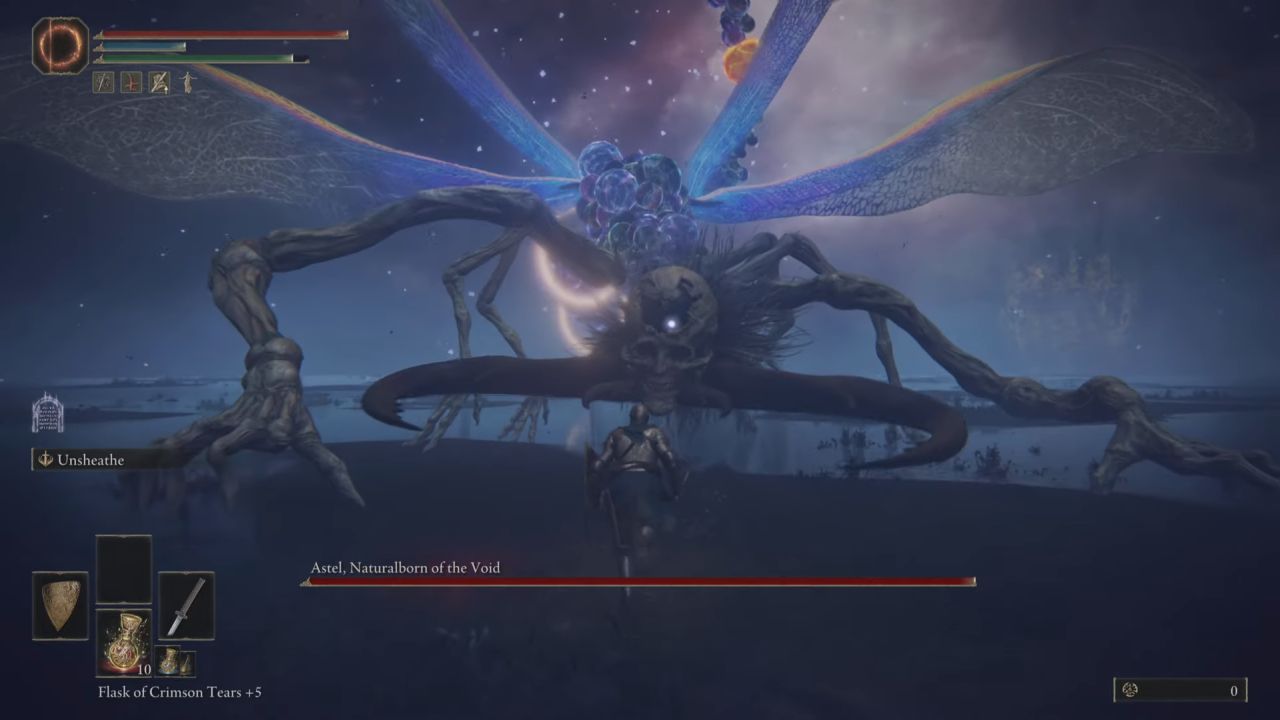 There are plenty of bosses in Elden Ring that are sure to make you resort to cheese or other methods alike. It’s understandable, this is many peoples’ first FromSoftware game given its raving reviews. In any case, there are also a handful of quests that lead you to bosses that you can’t normally get to without seeing them through. One of them is through Ranni’s quest. After getting the Dark Moon Ring and going through the Lake of Rot, a fearsome boss awaits. Here is how you can cheese Astel, Naturalborn of the Void in Elden Ring.

How to Cheese Astel in Elden Ring

Astel is a huge boss, so the camera is definitely going to be an issue, especially if you’re a melee user. It’s not recommended to use the lock-on system when fighting Astel. Just know your positioning and everything should be fine.

This boss also does not seem to be weak to anything. In fact, it seems to be resistant to Frost. However, Astel can still be inflicted with Scarlet Rot, Poison, and Blood Loss. It’ll just take longer for these status effects to proc, meaning you have to be more consistent with hits.

When you start the fight, do not immediately conjure up your Spirit Ashes. Astel spawns far away from the entrance, making him more likely to use his death beam. It comes out faster than it would take to use your bell, so wait and dodge the initial ranged attack.

While the Mimic Tear has been significantly nerfed in the recent updates, it’s still very much viable to take some aggro off the boss as you hit it. Using other strong Spirit Ashes can be just as effective, granted if you upgraded them with Gloveworts.

In this cheese strategy, you’re going to let your summon take most of the heat while you wail away at the boss. Its weak spot is its head, so try hard-hitting vertical attacks, like jumping heavy attacks. This works best with heavy, Strike weapons. These can help break Astel’s posture, opening him up for a Critical Hit.

You’ll still have to dodge his moves because they cover a lot of ground. Basically, if you see anything like pink dust, run or dodge away immediately. That pink stuff eventually explodes and can kill you if you are caught off guard. These usually come out when he does a claw swipe or teleports.

If you are too far from him, even from the initial start of the battle, Astel can shoot those lethal lasers at you. For ranged attackers, your best bet is to go melee. Use spells and incantations that imbue your weapons with a certain element except for frost. Better yet, get yourself a weapon that scales with either Faith or Intelligence.

There isn’t really an exploit to trivialize the boss, but using a summon, jumping heavy attacks, and dodging only the lethal hits can go a long way in making this boss a lot easier.

Elden Ring is out now for PlayStation 4 and 5, Xbox One and Series S/X, and PC.

Attack of the Fanboy / GAME GUIDES / Elden Ring Astel Cheese: How to Easily Beat Astel, Naturalborn of the Void