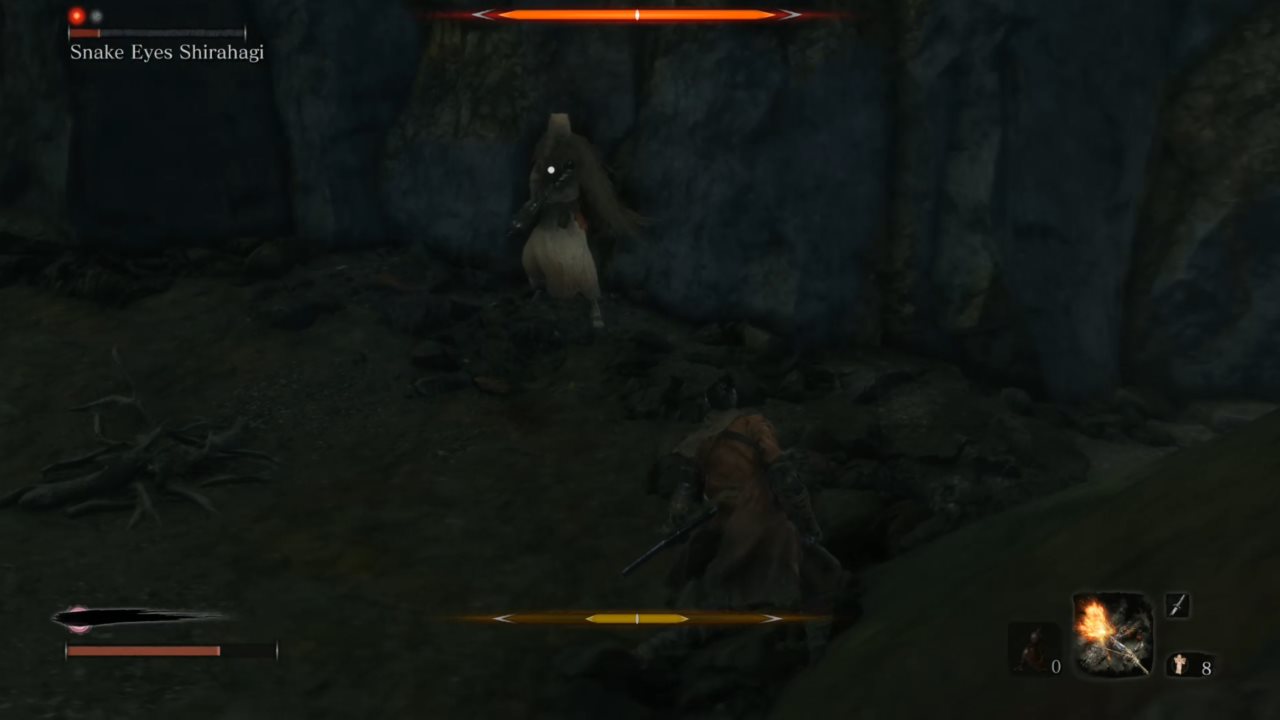 There are a lot of bosses in Sekiro: Shadows Die Twice. So many that sometimes you run into the same boss twice. This is the case for Snake Eyes, a gun-toting mini-boss that can be a pain if you don’t know what to do. The one most people will run into though is Shirahagi, who blocks your path through the Ashina Depths and presents a particularly unique challenge for players. To help you out, here’s how to beat Snake Eyes in Sekiro: Shadows Die Twice.

How to Beat Snake Eyes

Since you have to beat Snake Eyes Shirahagi to win the game we’ll focus on that battle. However, these tips and tricks can be shifted to the other times you run into Snake Eyes, excepting the particulars about the area. With that in mind, the big thing that Snake Eyes brings to Sekiro’s boss battles is a heavy focus on powerful ranged attacks. His massive gun deals a ton of damage if you don’t block it properly, so watch out for that.

Before the battle even begins though, you can make this much easier for yourself by preparing the environment. Snake Eyes Shirahagi is standing near a poisonous lake with a few enemies dotting the landscape. As you come from the lower Sculptor’s Idol, you’ll want to grapple to a platform and then to the ground, then silently take out the two guards. There’s other enemies nearby, so either eliminate them or be extra careful to not draw their attention, especially the ranged enemy on the ridge. This requires keeping Snake Eyes away from the poison lake, and keeping your fight closer to the walls.

Once you’re ready, sneak up behind Snake Eyes Shirahagi and deliver the first Deathblow to start combat. Many suggest Firecrackers as a great counter for this boss, and while I agree I think the best option is to prepare your Flame Vent and some oil. Once Snake Eyes starts to get back up, toss oil onto him and then hit him with the Flame Vent Prosthetic, setting him ablaze and leaving him open to some serious attack damage.

Vitality is important, but posture is the real focus here, as usual. Get some damage in first though, or Snake Eyes will just regenerate his posture the whole battle. Stay close, since moving too far away will just open you up to his sniper like gunshots. Watch for combos, blocking and deflecting as necessary then going for the counter strike once finished.

After that initial Flame Vent you can try to set him on fire again, or go for the Firecrackers instead. These distract Snake Eyes a lot, letting you get some serious damage and posture hits in. If you see a perilous attack coming in, be sure to jump or dodge out of the way. These will deal a ton of damage to Sekiro that you’ll struggle to heal while Snake Eyes takes shots at you. Also watch out if you get cornered in the cave area, since the camera has a tendency to lose its target-lock in this situation. Run away and regroup if this happens.

Follow these tips, stay patient, block the combos, and go for the open counters and you’ll know how to beat Snake Eyes in Sekiro: Shadows Die Twice.