Sekiro Guide: How and Where to get Treasure Carp Scales

How to get more Scales for the Hirata merchant 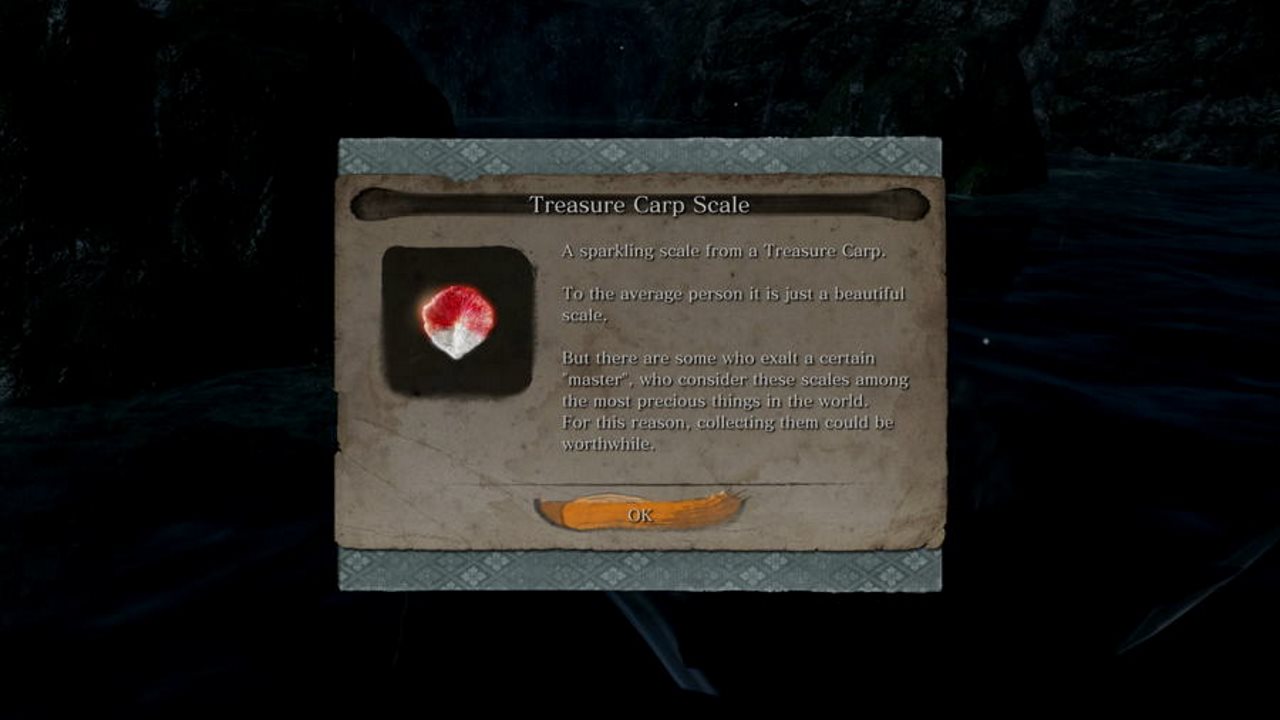 Like Dark Souls and other FromSoftware games before it, there are a ton of random items to find in the world of Sekiro: Shadows Die Twice. Whether it’s helpful buffs like Divine Confetti, usable items like Snap Seeds, or the ultra powerful Gourd Seeds, everything you pick up in the game has some use. This includes Treasure Carp Scales, which you might have collected by accident, or been told about from a very odd merchant. These things are used as currency at this merchant, who has some very important items. To help you buy them here’s how and where to get Treasure Carp Scales in Sekiro: Shadows Die Twice.

How and Where to Get Treasure Carp Scales

First off, in case you don’t know why you might want these things, you need to head to Hirata Estate. The first bridge you come across goes over a large river. Head up it to the right and you’ll see a bunch of rock outcroppings in the middle of the river. On one of these is a small container with someone or something inside. He is absolutely obsessed with Treasure Carp Scales and wants you to find as many of them as you can. He’ll sell you very valuable items for them, and you’ll need a decent amount to buy them all.

So that leaves you with where to get Scales as your main question. The answer is all over the place. Keeping an eye out for large bodies of water is important. Whenever you see one check it out and look for the colorful and large fish to be swimming around inside. But here’s the ones we’ve found (which look like almost all of them given what we’ve been able to purchase).

The first one you’ll find is actually right near the merchant. Just swim up river some more and you’ll see him swimming around. Kill it to get the Scale. Further into Hirata Estate you’ll cross another bridge, smaller this time and much higher up. There’s a larger troll-like enemy on it with an archer behind him. You don’t have to deal with them though because your next Treasure Carp Scales are found to the right and in the water near the waterfall.

For the other two spots we’ve located with Treasure Carp Scales you need to head to other areas of Sekiro: Shadows Die Twice. The next one you’re likely to encounter is in Senpou Temple. Past the Armored Warrior there are a series of temples. Mixed in amongst them is a small lake high on the mountain. To find it just get as high as you can and look around, you’ll spot it eventually. Two Treasure Carp are swimming around inside, so drop down and murder them for their sweet currency like droppings.

Finally there are a few in a location that might take you longer to get to. Mibu Village resides beyond Ashina Outskirts and Castle and into the Ashina Depths. Past the Hidden Forest you will locate this demented town, with a shop right near the Sculptor’s Idol. Next to this are the last Treasure Carp Scales we found in the game. Using these along you can buy almost all of the merchant’s items, so head back and grab the most valuable for you.

That’s all there is to know right now about how and where to get Treasure Carp Scales in Sekiro: Shadows Die Twice.

Attack of the Fanboy / GAME GUIDES / Sekiro Guide: How and Where to get Treasure Carp Scales