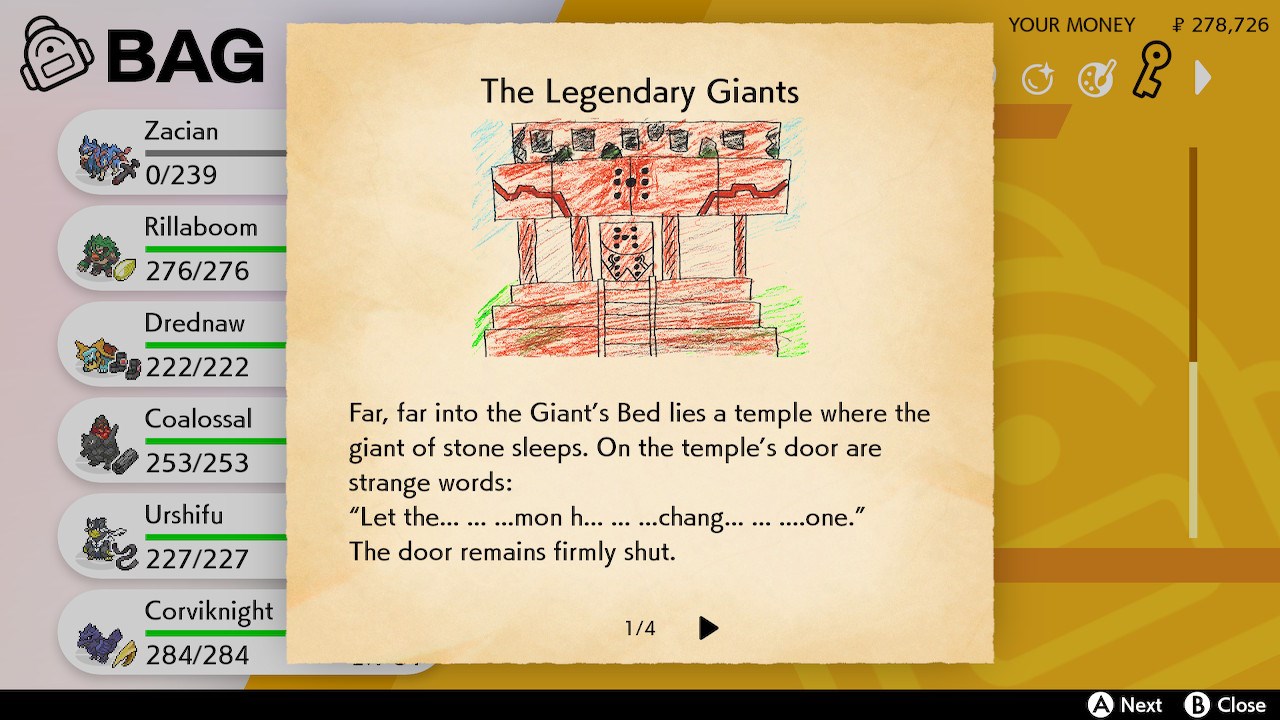 With Legendary Clue 1 completed, that means its time to move onto Legendary Clue 1 as part of the new Crown Tundra Expansion for Pokemon Sword and Shield. Rather than involving a brand new legendary entirely, like the first did with Calyrex, this one utilizes some class third generation Pokemon with the Regis. They are not alone though, as the game also introduces two new variants for them that you can catch as part of this quest known as “The Legendary Giants.”

How To Solve Legendary Clue 2

Legendary Clue 2 is already a bit different at the outset, since we get four pages of clues right from the start instead of having to wait and see a single clue get updated throughout. These are given directly from Peony once he sets up base camp in the house within Freezington, which is where you can set off on this quest.

Just so you know, the order of the pages are not in the most convenient order for you to go after them, but we will still list them by page number. For the best order otherwise, you may want to go with the pages in order of 3, 1, 2, but it doesn’t really matter overall.

The first page of Legendary Clue 2 says “Far, far into the Giant’s Bed lies a temple where the giant of stone sleeps. On the temple’s door are strange words: ‘Let the… … …mon h… … …chang… … ….one.’ The door remains firmly shut.” Since this is the first page, we’ll start with this one that has a clue that is a big confusing due to the missing letters. What it really is supposed to say is “Let the first Pokemon hold a never-changing stone,” which means we need to find an Everstone if we don’t already have. Thankfully, at least one of them is available within The Crown Tundra if you do not, which you can read more about in this guide. After getting the Everstone, give it to the Pokemon at the front of your party and interact with the door to open it. 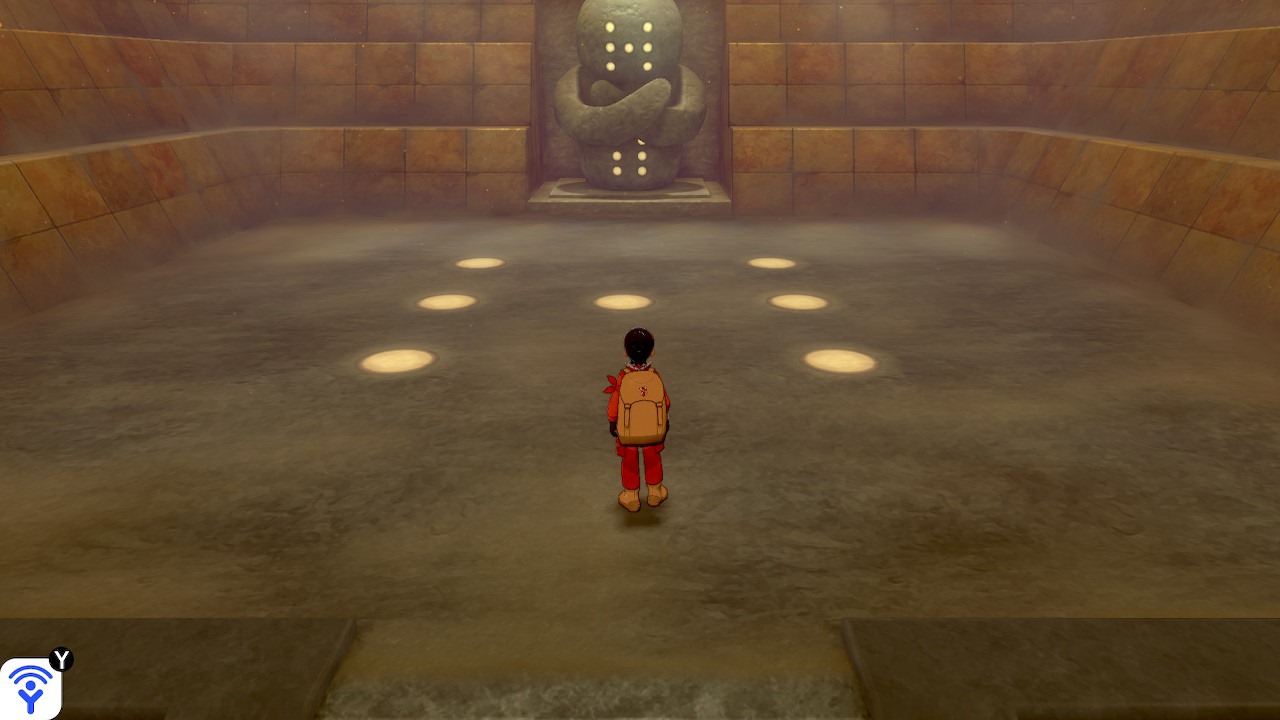 Once inside, you’ll see a group of circles on the group, which you need to walk over to activate. After activating them all, you can go interact with the statue and start a fight with Regirock. As its name indicate, Regirock is a Rock type Pokemon, which means you want to use Water, Grass, Fighting, Steel, or Ground type moves against it. The good thing here also is that if you accidentally knock it out before catching it, you can just step back on the circles to light them up and interact with the statue to try again. This could be a good way to grind too if you want.

The second page for Legendary Clue 2 says “Sunken in the side of Snowslide Slope lies a temple where the giant of ice sleeps. On the temple’s door are strange words: ‘Wa… togeth… … …iving… …stal… of sno…’ The door remains firmly shut.” As the hint indicates, head on over to Snowslide Slope and take the first western path that you can that will wind around and eventually bring you to the place we need to be. Interact with the door to reveal the message from before to actually be “Walk together with a living crystal of snow.” This may seem a little confusing at first, but what you need is to catch a Cryogonal and put it at the head of your party. They are very plentiful throughout the icy areas of The Crown Tundra, so you shouldn’t have any trouble finding one if you don’t already have one. 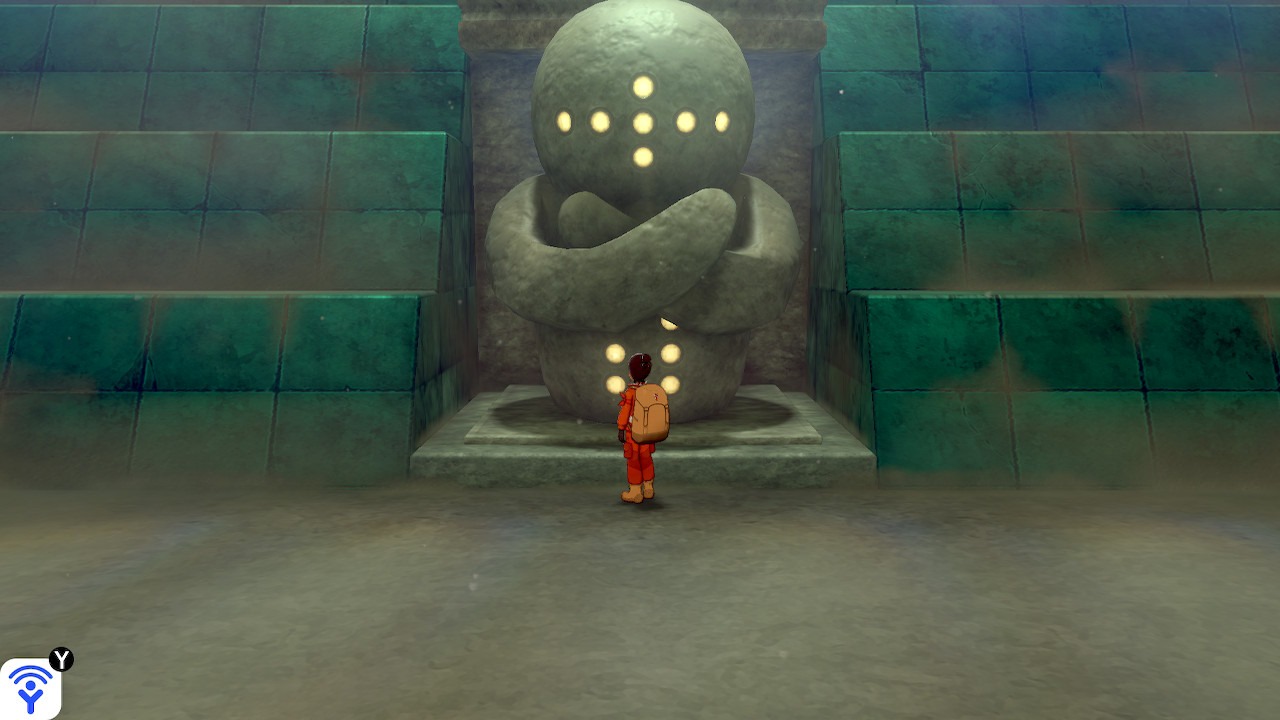 As before, you’ll find circles on the ground within the temple that you need to step on. Do this and you will be able to interact with the statue and face off against Regice. It is of course an Ice type Pokemon, so you’ll want to bring along some Fire, Fighting, Rock, or Steel moves to combat it. Just be careful not to knock it out, as you need to catch it. Like before though, you can try again if you accidentally do knock it out.

The third page for Legendary Clue 2 says “Near where green meets snow in the Giant’s Bed lies a temple where the giant of steel sleeps. On the temple’s door are strange words: ‘Let… … out… … …note… … wak… … …iant… … …eel.’ The door remains firmly shut.” This is referring to the stone temple closest to Freezington, with it being over to the west as soon as you head into Giant’s Bed. Once you get there and interact with the door, the message will actually be revealed to say “Let ring the piercing note that will wake the giant of steel.” The piercing note it is referring to is simply a whistle, so press in the left analog stick to whistle, which will open the door in front of you so that you can head inside. 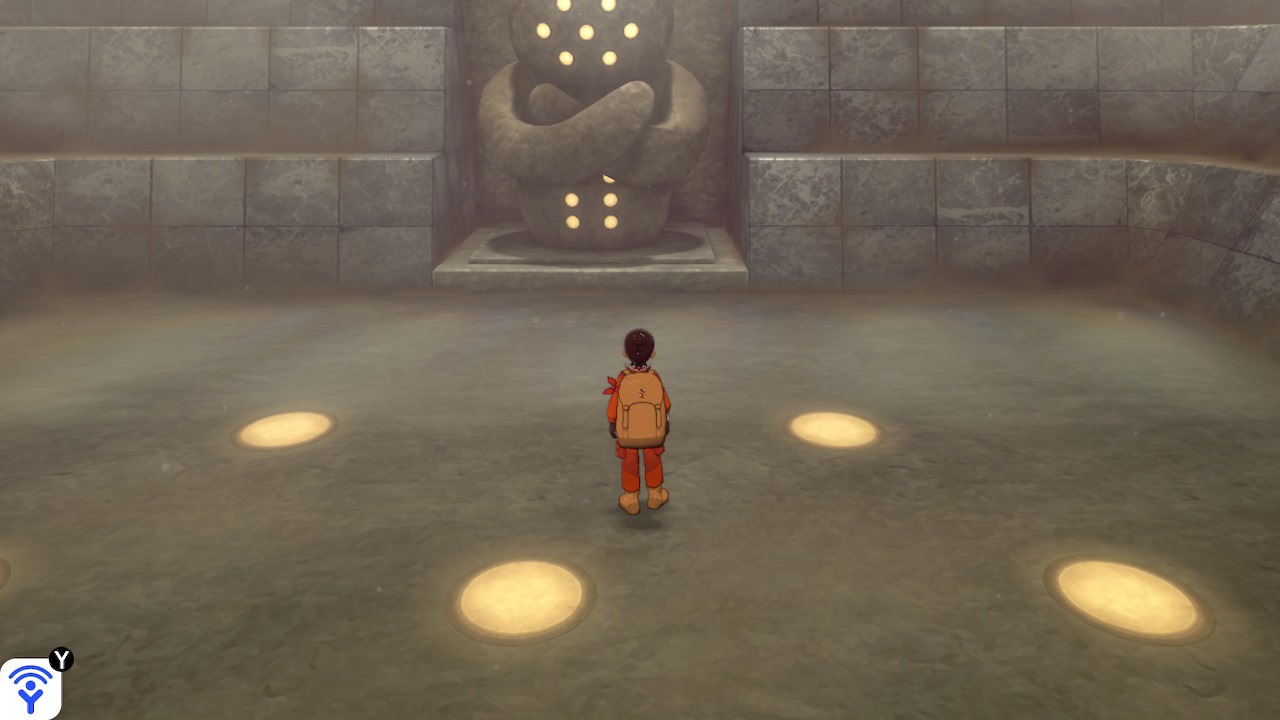 Inside the temple, you’ll see the same type of circles on the ground, which you must step on to light them up again. Once all are lit up, go up to the statue inside and interact with it. This will cause Registeel to appear and you get the chance to try and catch it. Like the other Regis here, Registeel is Level 70, so bring a Pokemon to combat it accordingly. With it being exclusively a Steel type, utilizes a Fire, Ground, or Fighting type will be your best bet.

Now that we have the three Regis so far, we can head and complete the fourth page of Legendary Clue 2, which could not have been done before we got all three. The clue for this one says “On the distant paths of Three-Point Pass lies a temple where two giants sleep. On the temple’s door are strange words: ‘Whe… … …ree … … …door… … …all be … …ened.’ The door remains firmly shut.” For this one, you’re going to have to head to Giant’s Foot to the east of Giant’s Bed and into the Roaring-Sea Caves and traverse through it until you reach the Frigid Sea. From here, you can head south to Three-Point Pass, which is where you’ll find the temple.

This one is multi-colored, which is obviously different from the others. This is because we can get one of two different new Regis within it. When you interact with the door, it will say “A giant of rock. A giant of ice. A giant of steel. When gather the three giants, the door of destiny shall be opened.” This fills in the blanks from the clue, which means we need to add all three Regis we have to our party. After doing this, interact with the door and it will let you in. 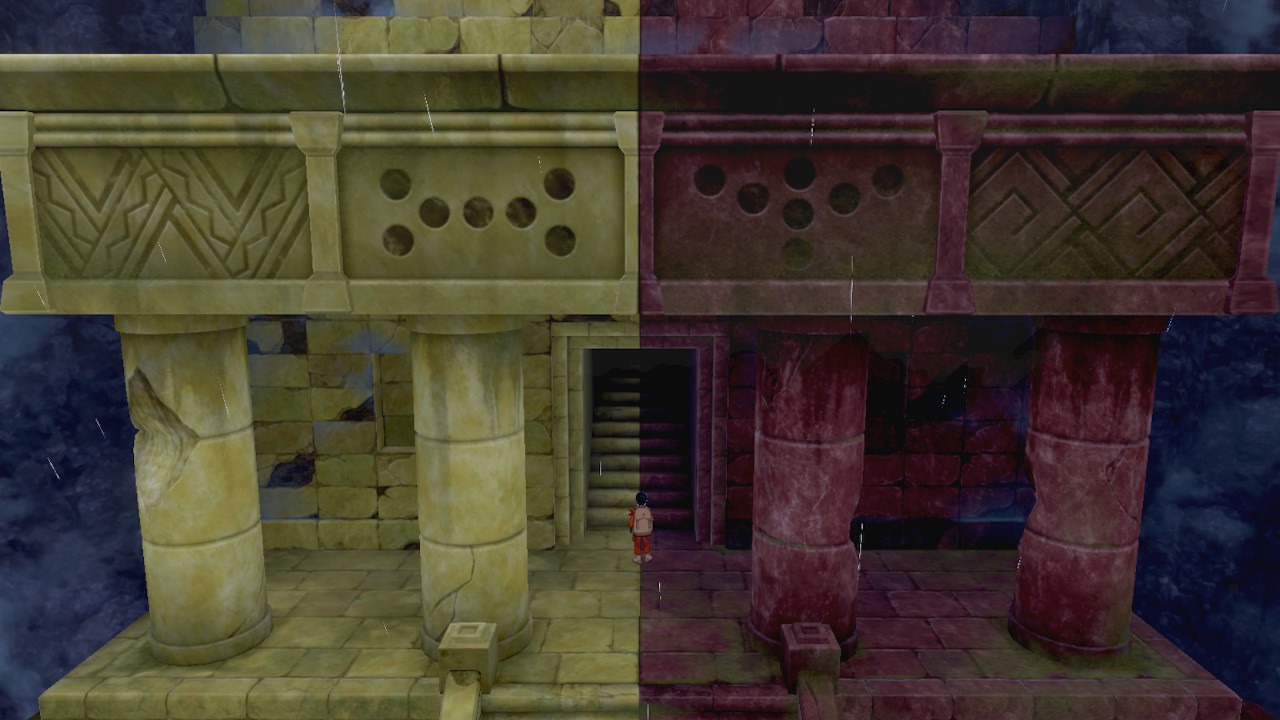 As you’re walking in, the camera will pan up to the top of the temple, with two interesting designs. This is actually how you will decide which one of the two new Regis you want to have by entering the pattern on the respective side. The yellow side and design will get you Regieleki, the Electric type, while the red side and design will get you Regidrago. Enter the pattern for the Regi that you would like and you can then interact with the statue to start a battle with it. Once you interact with the statue, you cannot change your mind either, so make sure you have picked the right one. Regieleki is a pure Electric type, so you’re going to want to bring in some Ground moves to deal the extra damage if you can. Regidrago is a Dragon type, so you’ll want to bring Ice, Dragon, or Fairy moves for that bout. Regardless of which one you select, just whittle down their health and try to catch it like the others.

After you’ve got either Regieleki or Regidrago, all there is left to do for Legendary Clue 2 is to head back to base camp and speak to Peony. Check in and talk to him about Regirock, Regice, Registeel, and whichever of the other two you selected and he will mark off the clue as completed officially.