GTA V Peyote Locations: Where to Find All 27 Peyote Plants

How and where to get all Peyote plants in GTA V. The next-gen update to GTA V is here and with it comes new players who haven’t experienced the Peyote plants yet. Peyote are a type of cactus that carry hallucinogenic properties and in GTA V, they are no different. There are 27 Peyote plants in total, each giving players a different out-of-body experience where they get to play as one of the animals in GTA V. We’ll start in the north and make out way south towards Los Santos. Here are all the Peyote locations in GTA V. The first Peyote is in the ocean, which can be hard to find. Off of the coast of Paleto Bay, while underwater, you’ll need to find an arched rock with coral around it. This is where the Peyote is.

The second Peyote is on the hill in Paleto Bay on a park bench. When in the park, climb up the hill in the center of it and the Peyote plant will be sitting next to it.

Once you are at the Gondola Station on Mount Chilliad, go behind the station itself and get on the trail. Look for two wooden posts with red flags on them. That is where you’ll find the third Peyote plant.

For this one, you’ll definitely need a helicopter. As you’re flying towards the north side of Mount Chilliad, you’ll see what looks like giant steps in the mountain. Go to the second step-like cliffside and you’ll find the fourth Peyote behind the lip of the cliff.

In the middle of Mount Gordo, there is a lake. The fifth Peytoe location in GTA V is here. Find it on the east bank next to a tree. In between the two north paths in Raton Canyon is the sixth Peyote location. You can find it on top of a rock formation that is north of the river path and south of the mountain path.

While you’re in Raton Canyon, the seventh Peyote location in GTA V is at an overlook spot. The trail that leads east is where you’ll find the overlook and the Peyote plant is to the right of the structure.

The eighth Peyote plant is east of Calafia Bridge in the northwest corner of the Alamo Sea. Look for the round alcove and the Peyote plant is directly to the east of it. It is sitting on the seas floor. 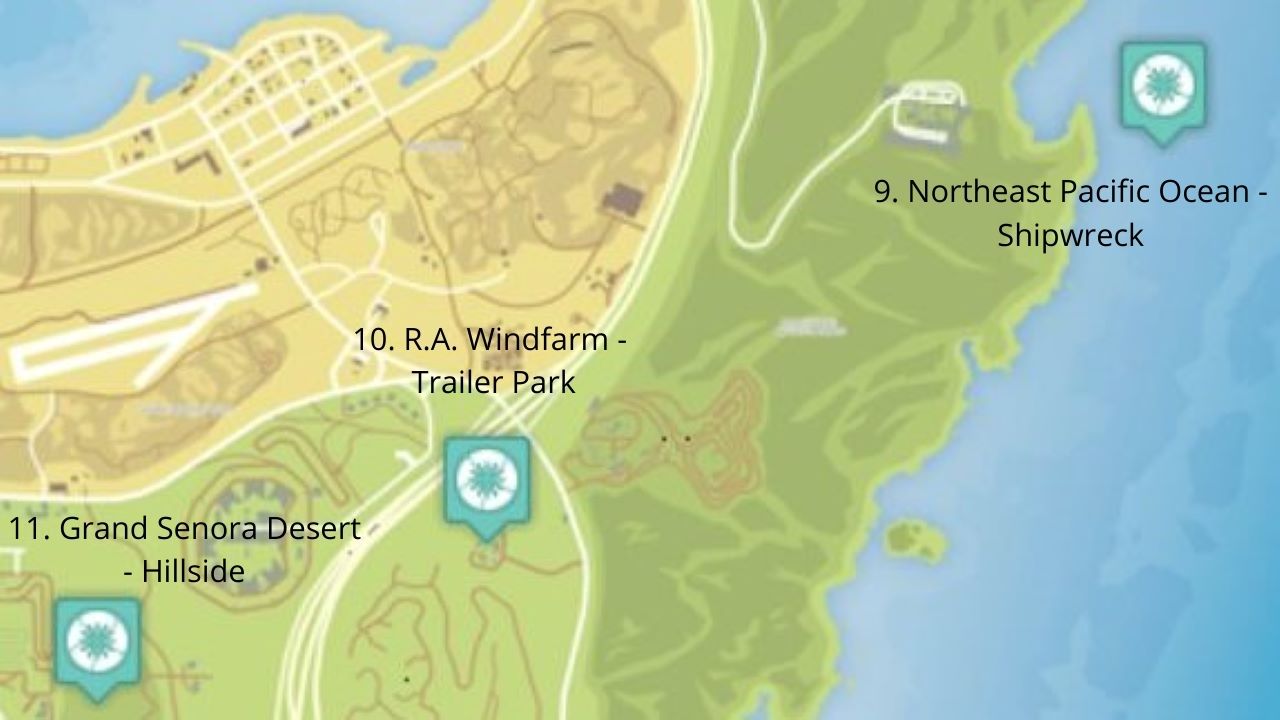 Back on dry ground, go to the trailer park in R.A. Windfarm. Once you’ve arrived, circle around the back of the trailer on the right side of the entrance. Here is where you’ll find the tenth Peyote plant.

This Peyote location is a bit hard to find. You’ll need a car for this one. Southeast of the Redwood Lights Track and around a tree on the hillside is where you’ll find the eleventh Peyote.

North of the Harmony Oil Fields is where you’ll find Peyote twelve. Look for the oil drill and head north of it. Surrounded by other scattered cacti is where this Peyote is.

The thirteenth Peyote plant is north of Fort Zancudo on Mount Josiah. You’ll need to enter the fort and drive around to the north side. Once you see a river trail, head up the mountain. Around the trees and bushes on the river trail is where you’ll find this Peyote.

Unfortunately, there is another underwater Peyote. This one is found directly west of the Lago Zancudo outwash past the bridge. Center yourself with the bridge and swim out. Look for a rowboat on some rocks and the Peyote will be just south of that. As you are driving up Tongva Drive, turn into the Two Hoots Falls circle where the three roads meet. Climb up the rocks on the left and you’ll find Peyote fifteen sitting on a rock.

Northwest of the Sisyphus Theater and northeast of the Galileo Observatory on East Galileo Avenue is where you’ll find Peyote sixteen. Just as the road begins to curve into the loop, head onto the dirt trail past the stone steps and barrier. Continue straight until you see a group of bushes. The Peyote is hiding behind that.

Northwest of Vinewood Bowl in the middle of the woods is where you’ll find Peyote seventeen. This spot is directly south of Marlowe Drive. It is also east of the hiking trail.

The eighteenth Peyote plant can be found directly north of Normandy Avenue where three streets meet. At the intersection, get out of your car and go behind the houses. You will find a sewer drainage pipe where the Peyote is.

On the top balcony of the Gentry Manor Hotel is the nineteenth Peyote plant. It is on the south side next to a potted plant. At Mirror Park, drive into the northmost col-de-sac on the east side. Head behind the third house on the right to find the Peyote plant sitting on the backyard patio.

The twenty-first Peyote location in GTA V is on the small southeast island in the Eastern Pacific Ocean. On the south side of the island is where the Peyote resides. 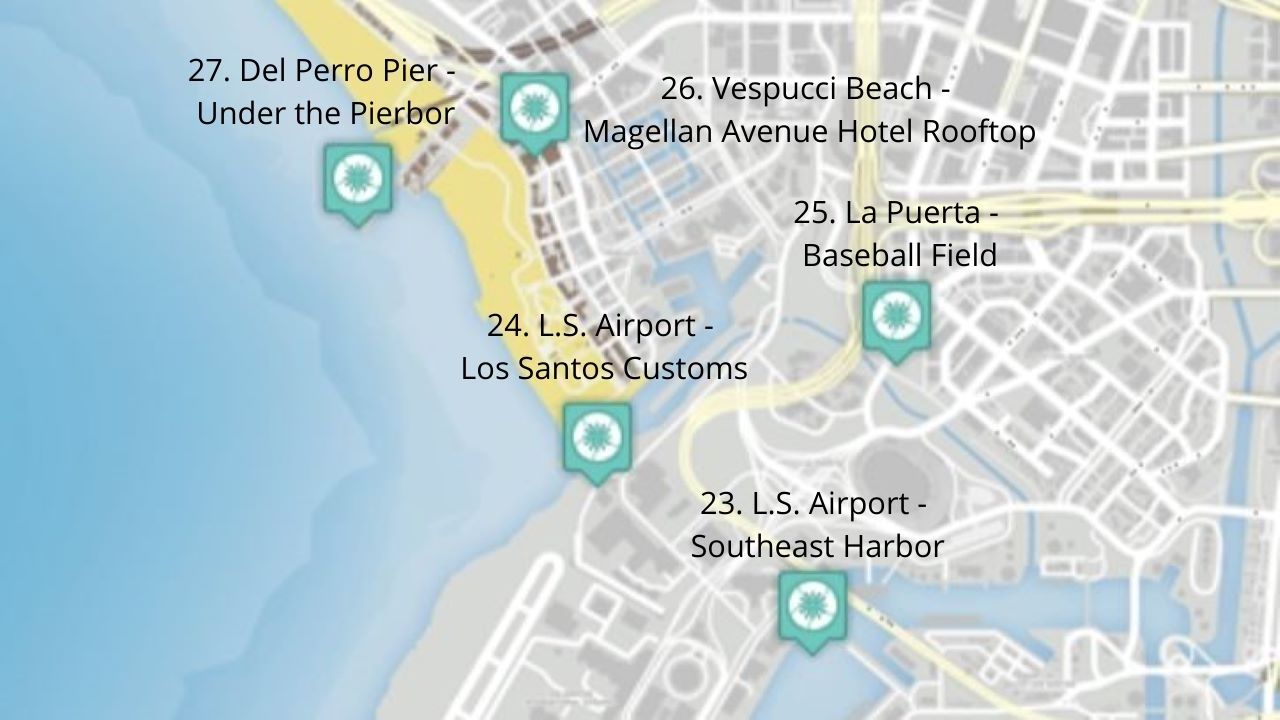 Southeast of the bridge on La Puerta Freeway is where the twenty-third Peyote location in GTA V is. Swim down to the ocean floor and find it among some coral.

The twenty-fourth Peyote plant is at Los Santos Customs. Travel along the side alley of the shop and behind the steel beams next to the school bus is the Peyote.

This Peyote plant is behind the batter’s area in the La Puerta baseball field. It is north of Maze Bank Arena just north of the river.

East of the Del Perro Pier and two houses down is where the twenty-sixth Peyote plant is. It is on the rooftop of the hotel, which is easily found by looking for the sunbathing chairs on the roof.

Travel to the end of the pier and jump off. The twenty-seventh Peyote plant is found on the seafloor at the center but slightly south of the pier. There are several big rocks around it and can be found by looking for the white petals.

And there you have it, all 27 Peyote locations in GTA V. For more, be sure to check out our GTA V guides.

Attack of the Fanboy / GAME GUIDES / GTA V Peyote Locations: Where to Find All 27 Peyote Plants